Blog should be called 'Winter Bats.'

It seems that posting in the winter is the realistic goal.

Over the past year I've received reports and dug up info on several locations where bats appear to be overwintering in the Olympia / Thurston Co. area. It was believed by many that bats in North America either hibernated for the winter months in a cave or something, or migrated to a much warmer area, like the Hoary bats that fly to Mexico for the winter.

There have been a few suggestions over the years that some Pacific NW bats occasionally become active or possibly stay active (e.g., David Nagorsen & Robert Brigham, in the 1994 Bats of British Colombia). In 2004 I started getting calls from folks who saw bats flying in December, and 2 of these reports turned out to be California myotis bats, and they were seeing them regularly on dry winter evenings. I started listening for & recording bats that winter, using my trusty Pettersson D24x bat detector, and heard Calif. and Silver-haired bats at most of the locations that I'd heard them in the summer. Not a lot of activity, but quite predictably on mild winter evenings, those non-rainy nights following days that got up to 10 degrees C (50F). I've heard them out and about down to 3C, and for many hours at a location. In Jan. 2005 I listened to several Silver-haired bats foraging at Priest Pt. Park until 11 pm -- 6 hours after sunset! The results of those first couple years of investigating, which included examining the Burke and Slater museum records for bats submitted in the winter (mostly Calif. and Silver-haired bats!) are in a paper I wrote for NW Naturalist in 2007.

I keep gathering information on our winter bats, and have a short list of places to check out this winter, including a barn where the owner regularly saw several Townsend's big-eared bats all last winter, and a bridge that I've seen one Big-brown bat overwinter for the past 2 years, and there's one there again now...

Most of my leads come from 'the general public' so keep me posted!

As close followers of bat behavior in the Pacific NW know, we have bats that remain in their summer locations and become active throughout the winter. A mild, dry evening produces many 'clicks' on the bat detectors, and almost always from Silver-haired and California myotis bats. The Calif. myotis bats are roosting under trim boards around our houses, barns, etc, and usually just one or two here and there. I've been watching two or three around our house since last spring, and they've been in the same spots this winter. If the daytime temperature gets into the 50s, and its not raining early evening, they are likely to go out foraging for an hour to two.

Cori, a fellow bat researcher in SE British Columbia (near Nelson) just told me she's been following some active Silver-haired bats in her area, and she has found similar behaviour. So its not just a behavior found in the 'mild Puget Sound climate zone' as some have suggested. She's recently found Silver-haireds that hang out in a cave during the sub-freezing weather, but during 'warm spells, ' they leave the cave. She put transmitters on a few in the cave, and the next time it warmed up again (above freezing), they left the cave, foraged, then would day-roost in trees until the temperatures dropped below freezing again. She said she's waiting for another warm spell, so they will go out and do their thing. Cori had a paper published in 2006 about finding recordings --near Calgary, Alberta--of Big brown bats on her 'long-term' bat detectors during the winter -- some recordings were when the temperature was as low as 20 degr. F (-6C). This is really different than what people have believed over the years, when bats were thought to either be 'hibernators' or 'migrators.' Silver-haired bats were thought to be migrators, and Calif. myotis hibernators...
No comments:

The point is: Bats are part of the equation, part of the environment which will be significantly changed, so let's deal with it! Since December of 2003 I've presented to CLAMP the connection of Capitol Lake--as a fresh water basin--to the the maternity cycle of many thousands of regional bats, and requested for at least enough research to find out if there are any possibilities for mitigating their certain losses if the basin's freshwater environment is removed.

Fairly often I'm asked (or more accurately told) 'if an estuary will hurt the bat colonies, you must support the lake option, right?'

My answer? The one I have given for the past 5 years: I can't endorse either option -- the managed freshwater lake nor the engineered estuary -- until there is a science-based discussion about the fate of the large congregation of reproductive bats who have found refuge in this remnant of freshwater habitat, water which sustains thousands of mothers and their nursing pups (yeah, I do it in one breath). I can't support a saltwater option unless a serious discussion about mitigating the effects on the bat maternity colonies has occurred, and reviewed by qualified professionals. A science team, not a policy team. This seems reasonable, but this request has never been acknowledged. The record shows that this, its not just some last minute "hey, what about the bats?" The can of worms is that it's not just the bats that have been brushed aside... but they'll do for a scapegoat if needed.

Parts of the engineered estuary proposal reminds me of using bio-fuel for transportation: the idea is great, but the details are really messy.
2 comments:

There are a few more bats at Woodard Bay than when the lake draining occurred, but the effect of the incident probably won't be obvious until next year, when we see how many bats made it through the winter, and return to the maternity colonies.

At Woodard Bay, there was a big drop in the number of bats flying out of the pier, but it gradually increased as the young started flying. What we don't know is how many young back at the pier roost were waiting for milk that never arrived, and may have perished--they'd drop in to the water, so we wouldn't be able to document this as we can at roosts over land.

Update, Saturday 25 July 09:
I took the Radar-mobile (aka: TMR - 'toyota, mobile radar') out for a spin last night, and took some screen images at Capitol Lake to compare with those from 2 years ago. Dramatically fewer bats over the water, and almost none over the mudflats. Not a surprise. Previous times the Radar unit showed that they were all over the lake's 3 chambers, the fewest were over the river channel (faster water, fewer insects?). That is the only place water has remained during this draining event. So even the little remaining water may be of little value to these bat moms struggling to feed themselves and their pups back at the nursery colonies, who are by now getting to be teenager size (and yes they are still nursing them!).
No comments:

Karen Fraser kindy sent me an email this morning, reporting the she spoke with the G.A. director Linda Bremer (G.A. manages Capitol Lake) about refilling the lake. Senator Fraser reported that Bremer said that as of 6 p.m. yesterday (Thursday) that they had closed the dam, so the refilling of the lake could proceed, 'to help the bats.' Thank you very much to both Linda and Karen.

While this will start getting fresh water back into the basin, nobody knows how long it will take for the 200+ acres of exposed mud to recover its 'macroinvertebrate' community (the bat food, midges, arising from the mud) , or the native plant communities, and therefore the food chain that has been damaged by this event. Stay tuned to the Sunday Olympian, I think that John Dodge may have talked to others who know (way) more about this for his Sunday column.
No comments:

What were they thinking?

The dedicated counters had 1,200 bats exiting the pier at the Woodard Bay bat colony last night, there were 3,300 last Thursday. The counters are going out to count again tomorrow night, as there was a SW breeze tonight. That can throw off the count--the bats seem to head into the wind more, which could have put some of the exiting bats out over the water, out of sight of the counting. We've used an extra person with a scope to verify this on occasion. With that caveat, plus that this is the time of the summer with the highest variability in the counts, I can report that we've never had a one-week change of this magnitude (-2,100).

Is this an effect from draining Capitol Lake at the most critical feeding period of the summer maternity cycle? We can't say for sure, but it certainly could be. The vast majority of the pregnant and nursing bats from several large maternity groups travel many miles to each night to Capitol Lake, feeding on minute aquatic insects like midges, mayflies, and the like. These insects spend most of their life aslarvae in the muddy bottom of the lake. Then one fine night they mature, pop to the surface, shed their extra layers, flap their new wings, and rise from the water's surface... into a bat's mouth! They don't do this from a dry mudflat like we have now. So, the normally super-rich lake is now effectively a desert, as far as these thousands of nursing mother bats are concerned. No, they won't have this food source if/when the area is converted to intertidal mudflat.

What are they thinking?

How did 260 acres of fresh water habitat... in downtown Olympia... below the Capitol Campus... whose fate has been under public discussion for the past 6 years... jsut get drained without consultation with anyone who monitors the flora and fauna of the lake?

Consider the readers' comments from the July 16 Olympian article about the draw-down, which at that time was reported to be a few feet lower for a short period of time:
Lakefair officials learned a couple of weeks ago that the lake would be drawn down during Lakefair." Since this was planned at least two weeks in advance, it hardly sounds like an emergency. Doesn't this mean that G.A. approved this proposal in June? 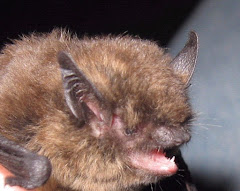 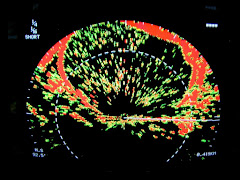 For comparison to this recent event, this is an image from the radar taken 2 years ago, showing the typical density of bats at the lake.